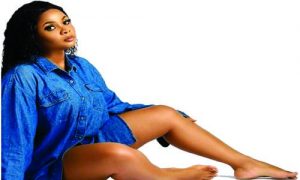 NOLLYWOOD actress Bimbo Ademoye have been nominated again for The Future Awards Africa (TFAA) 2019, in the category of Prize For Acting.

The actress said she has been under the weather revealed that the news has lessened the pains she is going through.

“Been battling the worst and most painful cough and sore throat ever,” she said.

“Waking up to this kinda lessened the pain.

“It feels good to know that a huge platform like @tfaafrica has been watching and find me worthy of being nominated alongside beautiful brilliant actors. Congratulations to every single nominee in my and every other category. We’re all winners already. Above all, congratulations to every single person who has been supporting me since the very beginning. Look how far we have come. I LOVE YOU ALL.”

Appreciating her mentors, Ademoye wrote“@uduakisong1 . Look mommy look. @biodunstephen look what we snagged auntie. Again a very huge thank you to @tfaafrica, I do not take this for granted.”

Ademoye said her acting career began in 2014 when she was casted in the short film Where Talent Lies, which received accolades from the Africa International Film Festival. In 2018, she was nominated for Best Actress in a Comedy/TV series at the Africa Magic Viewers Choice Awards for her role in the film, ‘Backup Wife.’